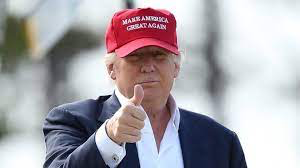 Anyone who thinks President Trump walked off the field on January 20, clearly does not know the character of who most would agree, is the single most effective President in our nation’s history.

On the contrary, President Trump and those still serving at the pleasure of 45, have taken to the swing states to finish cleaning GOP swamps, promising to rid the party of RINOS.

Georgia, ground zero for mass election grid failure, afforded a close eye on GOP strongholds to include Fulton and Cobb Counties. Both were victorious in their grassroots efforts to upend the GOP establishment.

The most notable victory landed in Cobb County with a sweeping victory for successful business owner Salleigh Grubbs. Winning by a landslide, Ms. Grubbs makes the case for the party’s exhaustion of identity politics and lack of vision. The self professed MAGA patriot, endured months of ridicule for a relatively late start in her service of the Cobb County GOP.

Ms. Grubbs testified before a Ga Senate Committee sharing her personal experience with uncovering voter fraud and destruction of ballots at the county level.
Her victory points to a larger trend in county conventions across Georgia and other states that indicate MAGA IS NOT DEAD.

President Trump would agree. He called Salleigh personally to congratulate her on her victory! For the 80 million voters who voted for President Trump, that spells commitment and hope. Something the nation could use a little more of. He has not abandoned America or his commitment to support MAGA candidates. While the GOP is focusing on a more ‘moderate’ approach, others are rallying to take the nation back, one county at a time.