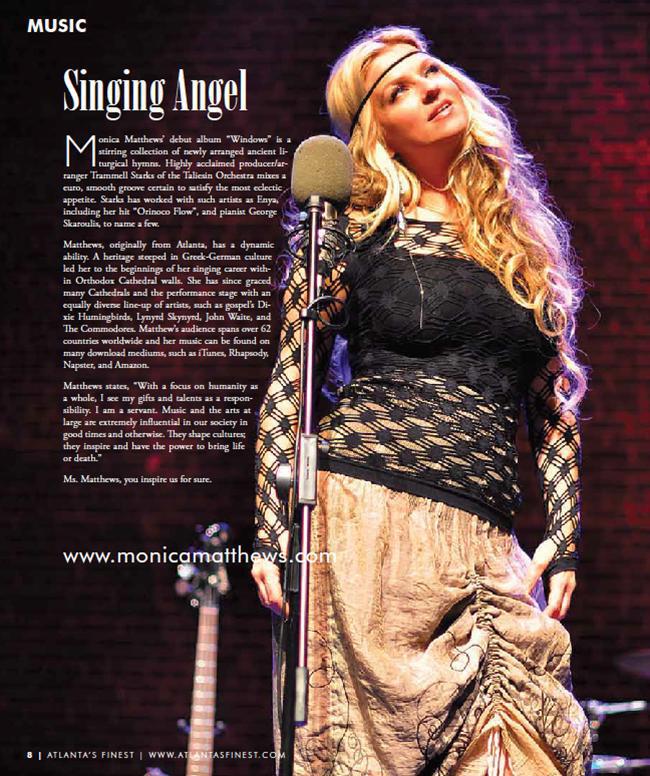 “Inspiring and uplifting…a must for all music collections.” –Gus Drugas

“Her voice and compositions are amazing…will touch your soul and bring peace to your life.” –Chris Papadopoulos

“The mood of this music just puts me on a cloud, lifting me to a higher spiritual place.” –Carol Baril

Monica Matthews’ dynamic ability as an artist is often attributed to her rich Euro/American upbringing—a heritage steeped in Greek/German culture led her to the beginnings of her singing career within the Orthodox Cathedral walls.

As a recording artist, she has since graced many cathedrals and the performance stage with an equally diverse line-up of artists, such as Gospel’s Dixie Humingbirds, Lynyrd Skynyrd, John Waite and The Commodores to name only a few.

Her music can be found on many global download mediums such as iTunes, Rhapsody, Spotify, Napster, Amazon, and more. Her music has also been featured in various television mediums.

Monica’s latest album Windows has become an international sensation in over 62 countries.

Consisting of newly arranged ancient liturgical hymns, Windows mixes the ancient with euro-friendly rhythms—certain to continue to satisfy even the most eclectic appetite. (Co-Produced by Trammell Starks of the Taliesin Orchestra) 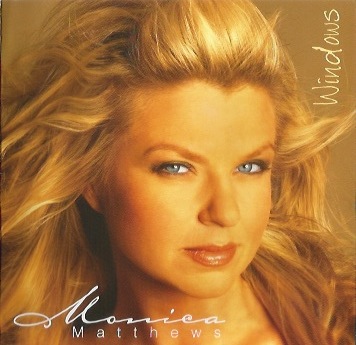 World Renowned Flautist Pedro Eustache of The Passion soundtrack, joins Monica on a haunting journey back to some of the world’s most sacred hymns.

This album finds no barrier of language or heart. With a modern flare, Windows satisfies an artistic craving as well as questions of the heart only music could pose.

Listen to a sample:

Monica landed a Grammy nomination in 2003, for her vocal contributions on George Skaroulis’s release, Second Nature.

She is also known to be the voice behind many corporate giants such as Philips Magnavox and Lufthansa Airlines and has also collaborated with George Veras, Executive Producer of Yanni, Live At The Acropolis resulting in a stunning performance for the unveiling of the Olympic Mural for Greece at the Newington-Cropsey Foundation Museum.

Her soul rendering versions of ancient hymns and modern Christian praise bring justice to the music the way it was meant to be. She transports the listener into another dimension.”

Samples: Listen to More of Monica

Get your copy of Windows now!

Send your soul on a beautiful spiritual journey with Monica Matthews back to some of the world’s most sacred hymns.

This album finds no barrier of language or heart. With a modern flare, Windows satisfies an artistic craving as well as questions of the heart only music could pose.

Listen to a sample:

Want Monica to Sing at Your Event?

If you’re interested in having Monica sing at your event, click the button below to check her availability.